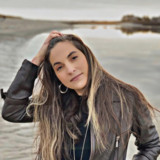 Amidst the madness of the 2020s, when nothing is certain and we all struggle to find hope for the future, we need artists like electro alt-pop songwriter/guitarist/producer Valerie Orth. For years she’s been writing songs inspired by challenges we’re all up against, both political and personal, and her latest album, RABBIT HOLE, couldn’t be more timely. In fact, the title track could easily be the soundtrack to Netflix’s The Social Dilemma. In the driving beat, futuristic sounds, and poignant lyrics, Orth weaves together current issues such as technology addiction, distraction, deception, and the quest for truth. Orth writes with a strong sense of self and a fierce feminist perspective, telling stories about alienated humanity and visions of a better tomorrow. In RABBIT HOLE, Orth says she’s taking on “how deeply social media, filters, and photoshop impact humans’ interactions with each other, with reality, and with the natural world. And while technology has allowed us to have a voice whenever and wherever, most of us have become dependent on it for a sense of worth. And we can’t seem to turn away from these forces that direct us how to think, live, and even love.” Orth joined Grammy-award winning engineer David “Dizmix” Lopez (Beyonce, Ice Cube, Snoop Dogg) to study the current condition of the human species and translate it into a cinematic album.