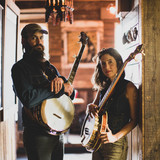 Kendl Winter comes from Arkansas, but she found her way to the Pacific Northwest after high school. The evergreens and damp air of Olympia, Washington, and the boundless music scene, had equal draw. She released three solo records on Olympia’s indie label, K Records, and performed in ramblin’ folk bands and anarchic punk bands before starting The Lowest Pair in 2013 with Palmer T. Lee. Palmer built his first banjo when he was 19 from pieces he serendipitously inherited. Shortly after deciding songwriting would be the most effective and enjoyable medium for his musings, he began cutting his teeth fronting Minneapolis string bands and touring the Midwest festival circuit, which is where he and Kendl first met, on the banks of the Mississippi.

Kendl likes to run, long distances, on the dirt trail past where the logging trucks have to turn around. Palmer likes to read Mark Twain, walk to town to the billiard hall and eavesdrop on the locals. Together, they are The Lowest Pair, a band Folk Radio UK describes as, “music for sunshine and mint juleps.”