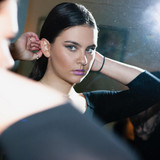 IOLITE is the moniker of a rising 21 - year-old singer/songwriter hailing from Denver, Colorado. Influenced by the likes of Lorde/Halsey, IOLITE claims the darker spectrum of the pop genre, marrying haunting vocals with hooky pop melodies. “Almost 20”, her latest EP is a 5 track EP stemming from her near death experience in November 2018, when she was kidnapped, held hostage, and shot while she escaped in Nashville, Tennessee. “Writing music was one of the ways I was able to process what happened, but this EP isn’t just about my kidnapping - it’s about so much more. The love I received afterwards from people was overwhelming. What was meant for evil, was turned into good because of the light and love that surrounded me. I was inspired by the community who gathered around me to live life bolder, and love others better. All the songs I wrote for the EP, and every song I continue to write moving forward, I’ll always dedicate to the people who were a beacon of light for me in such a dark time. They are proof that the dark doesn’t win if you don’t let it.” IOLITE is currently based out of Nashville and continues writing songs for her project as well as for other pop artists and film/television placements. You can hear her songs in your favorite TV shows including 15+ MTV placements, Disney, and commercials for Smile Direct Club and XBOX.