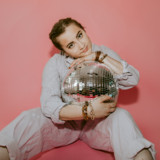 Growing up in the small town of Lafayette, Louisiana, Mia M was drawn to music at a very early age. She started singing when she was only five years old and began playing guitar and writing songs as a young teenager. Although humbled by her small town upbringing, her musical desires eventually led her to perform in Austin, Texas, a much bigger city by comparison, at the age of 15 in order to make her musical dreams a reality. Mia’s successes have led to collaborations with musicians such as Johnathan Cochran, covering James Arthur’s “Say You Won’t Let Go” as well as performing with Louisiana musicians/bands such as the LVVRS, The Late Nights, and Alyse Young. Her first EP, Seasons, was featured on 106.3 Radio Lafayette and was featured as a Spotlight Artist at their radio performance in the winter of 2016. In the summer of 2017, Mia M opened for the 2012 American Idol Winner, Phillip Phillips, at the Blue Bayou / Dixie Landin' Summer Concert Series as well as the Disney Channel Band, Forever In Your Mind, a few months later. Mia M is a verified artist on Spotify with listeners in major cities such as Dallas, Houston, Austin, New Orleans, and of course, Lafayette. When shifting from Mellow Pop to Contemporary Christian during college, Mia M began falling in love with music more and more. She felt that that was where God was calling her, and that she needed to only create music for the Glory of God.