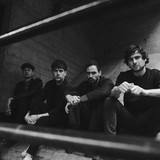 After heightening their credentials as one of the North East’s brightest prospects, very little stands in FEVA’s way. Hailing from Newcastle Upon Tyne, the group began earning their stripes within the regions underground circuit, expeditiously leading them to a sell out headline show at iconic Newcastle venue Riverside, embark on a UK tour supporting The Pale White and performing alongside Noel Gallagher’s High Flying Birds at This Is Tomorrow Festival 2019.

Spearheaded by charismatic frontman Sam Reynolds with his snarling lead vocals, the rising quartet combine fierce indie licks and aggressive guitar tones. These trademark qualities have already earned widespread critical acclaim (The Line Of Best Fit, Clash, Dork) and praise across the airwaves (BBC Radio 1, BBC 6 Music). Off their own back FEVA have taken themselves from underground favourites to an act worthy of bigger stages. The groundwork has been laid and audiences are jumping on-board. 2020 will see FEVA captivate live audiences throughout the UK and precede with a string of releases throughout the year.