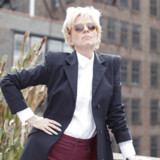 Ellen's passionate and commanding voice has paved the way for a long and diverse career. She moved to New York City at age 21 and by the mid-1970s was a touring performer. It was during this period that she met Meat Loaf and Jim Steinman, the singer and songwriter behind the Top 40 hit “Paradise by the Dashboard Light.” An eight-minute ode to teenage sex and romance, “Paradise” featured Fole assuming the female role to Meat Loaf’s male lead. She also provided backing vocals on three additional tracks on Bat Out of Hell (1977), an album that has sold 50 million copies worldwide (14 million in the U.S.). After the success of Bat Out of Hell, Foley released a trio of solo albums in collaboration with Ian Hunter, Mick Ronson, and the Clash. She also kept busy with session work, singing on albums by Blue Öyster Cult, Joe Jackson, the Clash, and Dan Hartman, among others. Parallel to her rock career, Foley worked as both a stage and screen actress. Many of her fans know her as TV series regular Billie Young in Night Court (1984-1985). After a 30-year gap between solo albums, Foley returned in 2013 with About Time. Created in collaboration with musician/songwriter Paul Foglino, the LP was well received with The Huffington Post calling it “a kickass roots rock affair.” Today, Foley has the same rock ‘n roll energy and great stage moves she did when she was fighting off Meatloaf at the dashboard light.