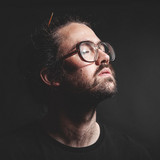 Touring with new album now! For many years, music producer Jan Kerscher has quietly been working on his vision of spherical post pop - infused with a touch of apocalypse. Inspired by the absurdity of modern life, his solo project Like Lovers has grown to a sudden emergence, an uncomfortable truth that captures listeners right away. On September 6th he just released his first album "Everything All The Time Forever" with 11 beautiful tracks and will plays a lot of shows in October 2019 (more to come). Whereas Jan Kerscher has a very clear mission as a producer, working on his own music turns out to be a lot more complicated. Having to persist the ears of both Jan being a musician and a producer, the initial song ideas have a really long way to go. Consequently, Kerscher plays almost all the instruments in his songs himself. Like Lovers points to numerous musical influences. He started getting lost in the works of Björk, Radiohead, Jeff Buckley & Co. Primarily, this soundtrack played with his mind and shaped a sensitive emotionality that eventually find its way into his own music. Later on, these emotions got organized neatly by his new found love of Math Rock and that is the way it still is to this day. Most of all it is the interaction between the raw energy, the technical level but also strong emotions that Kerscher finds fascinating about bands like Three Trapped Tigers, TTNG oder CHON.