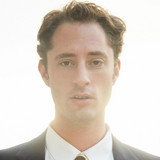 Born into a cult in Iowa, HNRY FLWR grew up meditating and moving around the world with his psychic mother who claims to remember being born. As an adult his inspirations range from hypnotism to drone music to televangelism to clowning. He draws from this background to produce secular spiritual rock with his beautiful 6-piece band in New York City. Since receiving a “Buzzy” review from The New York Times and selling out The Sultan Room in early 2020, they have gained a reputation for church-like live performances that are as powerfully immersive as they are moving. Their “brilliant” (GoldFlakePaint) debut EP, FLOWERAMA, was released in the summer of 2017 on Paper Garden Records and quickly went viral on Spotify with over half a million streams. The “melodic, danceable, and devastating” (Alt Citizen) EP was produced by David Groener Jr, (The National, Jonsi). The project was created by David Van Witt, who uses sweeping 80’s synths, jangle-psych guitars, vintage drum machines and his melancholy baritone to explore themes of mystery, human connection, and The Infinite Void.