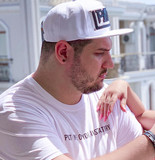 L Pádr3 is a singer-songwriter, producer and musician raised in Bulgaria. He took his first steps in the music, learning the piano and singing. Few years later he began with songwriting and producing music in different styles for another artists as well for himself.   In 2018 he started to sympathize to the Reggaeton wave and not long after, he made his first Reggaeton single - "Sola (Un Dos Tres)" featuring Barby K.   In July 2019 he began to work with the popular bulgarian model and singer STAMENOWA creating the hottest reggaeton of the year - “Fuego”. Inspired of Tyga’s songs he produced her second single - “Limited Edition”.   In 2020 was born his second single - “Всяка нощ”. Then he featured in STAMENOWA’s summer reggaeton song - “Bad Bunny” and now with with the beginning of 2021, he joined the brand new label “We Made It Records” staying fully behind the whole music production of the song “GUSSI GANG” collaborating with artists like D!do, Yavkata and Mom4eto.