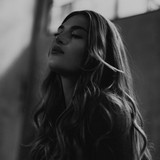 Having formed an early love for performing the songstress initially started her career singing and acting in commercials, but not long after made the decision to move to Nashville. Her time there further ignited her passion for songwriting and born storyteller has since been releasing honest and infectious music resonating with listeners across the globe.