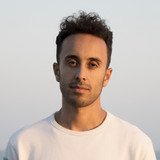 Melaku is a pop music artist from Santa Cruz, California.

His music updates the classic sounds of the 60s and 70s with a modern songwriting and production ethos. His self-produced debut album “Golden Age” was released in 2018 on his independent record label Angellion Records, and received critical acclaim from publications like With Guitars Magazine, Tattoo Magazine, The Indie Source, and Consequence Of Sound.