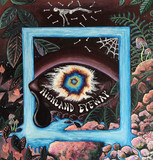 Lucid, psychedelic dreamscapes evoked by Highland Eyeway draw the listener into other-wordly dimensions with their new release “Spirit Wrangler EP”.   The EP features 5 songs that are introduced by the first track “(transmission)” which attunes the listener for saturated, synesthesia-producing tones that are present throughout the listening. Picture meeting a foreign spirit on an alternate planet travelled to in a dream.   Highland Eyeway was conceived in North Vancouver, Canada (traditional territories of the Musqueam, Squamish, and Tseil-Waututh First Peoples) in September 2014. Influenced by mystical forest canyons with pulsing moss-covered trees that hold secrets for its dwellers, the band aimed to acknowledge these patterns by reflecting them in sound. Bands like Dead Meadow, Dinosaur Jr., The Brian Jonestown Massacre, and Stereolab, along with experimental themes produced by Boards of Canada helped shape Highland Eyeway’s tone and deliverance.   Since its beginning, Highland Eyeway has had an evolving cast of members accompanying Houston Matson-Moore on guitar and Massimo Andolfatto on bass. Teagan Ramage plays drums on the current Spirit Wrangler EP and has been with the band since 2017, providing heavy, progressing drum rhythms which notably speak on the title track “Spirit Wranger”. Moving forward from this release, the band plans to open up the lineup to include a larger cast of members to further explore the soundscape with.