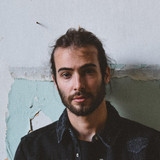 Demetris Mesimeris is a singer-songwriter whose music combines elements from the urban Greek folk tradition and rebetiko music, updated with a fresh take on orchestration. His first release in August 2014 was the single Eikona Dihos Hroma. With continual gigs over the last couple of years, collaborations with significant artists from the Greek music scene, and his recent album Eho Tou Kosmou Poiimata (I Have the World’s Poems), Mesimeris has gained traction in the Greek folk music scene of Cyprus. Released in June 2020, the vocalist-guitarist’s album is a collection of ten songs; ten poems about life, love and the concerns of each day - a journey that has love as its compass. Production and orchestration comes courtesy of the renowned Fotis Siotas from Greece, who has countless credits on Greece’s most-loved indie albums of the millennium. His first live concert album Zontani Ihografisi was released in January 2021 with some of his favorite songs from various artists as well his own.