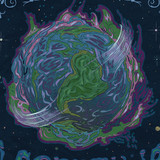 A throbbing, psycho-sonic, groove rock colossus with punk attitude and psychedelic tendencies. Lacertilia are a Cardiff based quintet that forge psychedelia, space rock, stoner metal and proto-punk into a compelling heavy rock sound. The band's monster riffs, trancey grooves and intense, primal energy evoke the sights and sounds of The Stooges, Hawkwind, The Doors and Monster Magnet. Since their inception in 2013, Lacertilia have toured the UK and Europe extensively, sharing the stage with Karma To Burn, Hawklords, Orange Goblin, Elder, Honky and countless others. Their wild and energetic stage shows have established them as firm favourites on the underground rock scene, securing them performances at Hellfest, Bearded Theory and Freak Valley. Lacertilia have released 2 EPs and 1 LP previously, their heady sound best captured on their debut album ‘We’re Already Inside Your Mind’ which was released in 2016. The album was well received by both the public and the press which furthered their growing reputation worldwide. The band have just released their second album ‘Calling The Quarters’ which was recorded early 2019 at the legendary Foel Studios (Hawkwind, Ozric Tentacles, Napalm Death, Electric Wizard) in the depths of Mid Wales. The album was mixed and mastered by Sam Thredder (Elephant Tree, Chubby Thunderous Bad Kush Masters, Slabdragger) with artwork by Headbang Design (Pentagram, Suicidal Tendencies, Blues Pills). To be continued . . .