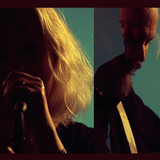 (Sept -17) THE SWEDISH INDIE POP BAND IN DEED IS BACK.  During some intense years around the new millennium the guitar based Swedish powerpop band In Deed could be heard on national radio and seen on indie pop scenes all over the country, for example on Swedens biggest music festival Hultsfredsfestivalen. In Deeds debut album At 4000 Meters (2001) got great response and reviews. Now, some 13 years after the band took a break from touring, their second album Everest is released (release date October 27th 2017).   In Deed from Uppsala, Sweden, with lead singer Linda Karlsberg, guitarist Richard Öhrn and drummer Marcus Segersvärd, started in 1995 and was a common act on the indie pop scene around the new millennium, playing the same venues as similar bands of the era like The Sounds, The Pusjkins and The Cardigans.   The album Everest contains of eleven songs in the timeless genre of sixties and nineties inspired pop and rock. As on previous releases, melodies, harmonies and a self-confident attitude shines. In Deed stays true to their influences, amongst them the melancholic and cool 60’s groups like The Zombies, as well as the energetic and still beautiful music from groups like The Posies and of course the Manchester scene, for example The Verve.   The first single the atmospheric Five Times A Day from the album Everest, was released in September 20th 2017.   (Sept, 2017)