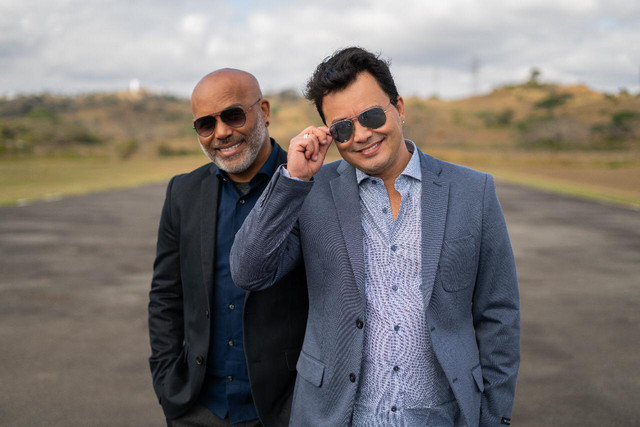 Sertaneja duo Rick & Renner were formed in the late '80s in the shadows of the Federal District in Brasilia. Rick (born Geraldo Antônio de Carvalho in Monte do Carmo, May 12, 1966) and Renner (born Ivair dos Reis Gonçalves in Brasilia, November 19, 1971) worked their way from humble beginnings to become one of the genre's most well-established acts. Rick, having developed a group with his sister called Seremp & Serenata, was forced to find a new partner when their father decided to put an end to his daughter's musical pursuits. Renner, who had been playing bars in the area with a local rock group, agreed to fill the empty slot of second voice. Some trial and error revealed Renner to have a more distinctive voice and the pair switched, Rick taking on a supportive vocal role. The duo began performing in 1987, and were quickly noticed by fellow artist Zezé Di Camargo, who used his connections to pave the way for a deal with Continental. Rick & Renner's debut album was released in 1993, entitled Vol. 1. Their romantic, melancholy tone reflected an intimate knowledge of their audience's taste, earning them airplay outside their native Brasilia, followed by opportunities to perform regionally. In the years that followed, Vol. 2, Vol. 3, and Vol. 4 were released, each to a larger audience as the pair's popularity grew. Released in 1999, Instante Magico was their final release with Continental before moving to the label's parent company, Warner Music. Over the years, Rick & Renner's large discography has generated genre classics such as "Ela e Demais" and "Feiticeira," earning them a place in sertaneja history. ~ Evan C. Gutierrez, Rovi