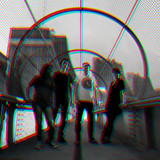 Since the release of their self-titled debut album back in 2013, Rev Rev Rev – based in Modena, Italy – have repeatedly been hailed as one of the finest new shoegaze bands. They’ve clocked up airtime and praise from BBC 6 Music, Drowned In Sound, Clash Magazine and Bandcamp Daily and wound up taking their notorious live shows across the UK and Europe; sharing the stage with the likes of The Jesus and Mary Chain, the Brian Jonestown Massacre, The Telescopes and Ringo Deathstarr along the way. The band were invited at SXSW 2019, where their live set impressed Bob Boilen of All Songs Considered and earned them a feature on NPR's SXSW wrap-up as well as airplay on the network's radios. The new album, produced by James Aparicio (Spiritualized, Dead Vibrations), marks also their signing on cult indie psych label Fuzz Club. “Kykeon” was a psychedelic drink made up of several ingredients, consumed during Eleusinian Mysteries, a set of rites, ceremonies and experiences held in the ancient Greece. Rev Rev Rev's Kykeon is murky, ritualistic drone-rock including trance-like drumming, fuzzy reverberated guitars, tons of feedback and abrasive atonal sounds. But also Loveless-esque shoegaze sound with Laura Iacuzio’s shadowy, ethereal vocals emerging through all-consuming walls-of-noise. A certain sense of danger and losing control runs throughout the album - but the package also includes a flight into deep space amid the stars.