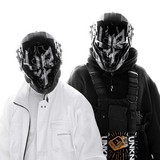 Over the past four years mysterious German duo Unknown Brain has risen through the ranks to become the shadowy kings of the electronic music scene. With gargantuan YouTube viewing figures that dwarf those of their peers and Spotify streaming numbers that place them firmly alongside the likes of Porter Robinson, What So Not and Cashmere Cat, Unknown Brain are the electronic superheroes you’ve heard but probably don’t know… Hiding behind the anonymity of their trademark masks, the pair prefer to dwell in the depths of their mammoth bassline constructs, locked away in a studio creating beautifully melodic worlds that rise up like shining edifices from their bottom line foundations. Indeed, just take a listen through their discography over the past four years and there is a definite sense of dimensional storytelling to their music, something that has proven popular not just with an immense network of content creators but also labels like Warner Music, Spinnin’ Records, NCS and Universal Music Group. With over 400k daily streams and monthly listeners topping the 2 million mark, Unknown Brain are poised to break through into the mainstream strata of electronic music. What happens to take them there, which single will raise their profile to the next level remains to be seen. One thing that is entirely certain, is that is only now a matter of time...