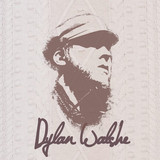 Irish musician Dylan Walshe is from the southeastern coast of Dublin. He is known for his engaging impassioned live performances, lyrical songwriting & unique vocal style. Typically touring internationally as a solo acoustic performer, his music is steeped in the traditions of Folk, Irish, Singer-songwriter, One-man band & Roots Music. After spending his 20s splitting his time between London & Ireland, Dylan now resides in Nashville, Tennessee. Most recently, Dylan toured the US & Canada with Flogging Molly & The White Buffalo in 2017. In 2018, Dylan opened for Billy Bob Thornton & The Boxmasters on their Maine US dates. In 2018, Dylan also recorded with James Fearnley of The Pogues & those recordings are featured on Dylan's debut studio album 'All Manner Of Ways'. In 2019, Dylan toured Europe & the UK with the Swedish Heavy Metal band Avatar & the Celtic Punk band The Mahones. As a solo performer, Dylan has headlined tours throughout much of Europe, the UK & the US. Dylan has also appeared on bills with artists such as Dr. Ralph Stanley, Ricky Skaggs, Peter Rowan, Ramblin' Jack Elliott, The Skatalites, DeVotchKa, NOFX,