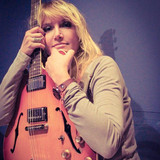 Singer, songwriter, guitarist, shortly the "Roman Blues Woman", as she calls herself on an album she recorded in New Orleans. (2013) Head girl of Blues women in Italy, from the United States, she brought her music back to Italy, and then from Norway to Ethiopia ... from prestigious stages to small clubs, always with the same interpretative vitality, acquiring more and more depth and credibility. The press describes her as “the most beautiful hope of the Blues made in Italy”, a spirited singer and excellent school guitarist. Equipped with an intense personality, that is reflected in her sensual and biting voice, and in her guitar phrasing too, with the slide guitar and the Dobro. " She celebrates 20 years career with “ Riding into the Bluesland", a self-made docufilm, which highlighted her inexhaustible skills as a versatile artist. She releases new album Craft Songs in 2019 via Noja Recordings, all original songs. The CD is a beautiful sample of blues-funk-rock, the eleven songs in the lineup are never less than appreciable, and if on the one hand, they refer to the tradition of the genre (but with great personality, in terms of writing), on the other they come to terms with some unusual modernist vista - or perhaps it would be better to say nostalgic, but certainly outside the confines of what we usually identify with the word "blues" - like a "Pacific Trash Vortex" hovering between Moroder and New Orleans, or Dadaist, like the intriguing "Bottom Of A Glass".