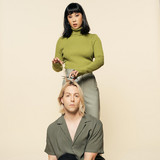 The Naked And Famous

Featuring The Naked And Famous

New Zealand indie electronic ensemble the Naked and Famous are known for their effusively melodic anthems, informed by dance-oriented '80s-style post-punk and synth pop. Bouyed by the song "Young Blood," the band broke through with their 2010 debut Passive Me, Aggressive You. They've only grown in sophistication, offering deeply emotive, synth-inflected albums like 2016's Simple Forms and 2018's acoustic-production A Still Heart. Centered around the talents of vocalist Alisa Xayalith and instrumentalist/vocalist Thom Powers, the band formed in 2008 and released two EPs before adding members to play live. In 2010 they released their debut album, Passive Me, Aggressive You, featuring the number one single "Young Blood." In support of their debut, the band went on a massive world tour, performing over 200 dates. With the tour at an end, the group found themselves relocating to Laurel Canyon, Los Angeles in 2012 with the aim of writing and recording their sophomore release. Working with the likes of Alan Moulder and Justin Meldal-Johnson, the group released their second album, In Rolling Waves, in September 2013. Buoyed by the singles "Hearts Like Ours," "A Stillness," and "I Kill Giants," the album reached number four in New Zealand and peaked at number 14 on Billboard's U.S. Top Alternative Albums chart. In 2016, the Naked and Famous returned with their third full-length album, Simple Forms. The album came after an extended hiatus during which time Powers and Xayalith ended their romantic relationship; a painful transition that informed the recording of the album. Produced at Powers' home in Echo Park in Los Angeles, Simple Forms featured the single "Higher." Over the next year, the band toured, joining Wavves and blink-182 as a supporting act. In 2018, they delivered A Still Heart, which featured acoustic versions of songs off their previous albums. Following the album's release, the band parted ways with longtime members keyboardist Aaron Short and drummer Jesse Wood. In the wake of their departure, Powers and Xayalith brought on board keyboardist and multi-instrumentalist Luna Shadows for live shows before beginning work on their fourth album. Released in July 2020, Recover was the first Naked and Famous album to showcase Powers and Xayalith as a duo. Co-produced by Simon Oscroft, and featuring contributions by Shadows, it included the spotlight tracks "Bury Us," "Sunseeker," and "Come as You Are." ~ Matt Collar