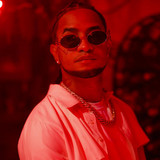 Rapper Mozart La Para grew up on the outskirts of Santa Domingo in the Dominican Republic on a diet of classic Reggae en Español, and by the age of 12 had developed a knack for freestyling. Taking the skills he'd established, La Para entered local freestyle battles and eventually would become a regular finalist in the Batalla de los Gallos. While most of his contemporaries were embracing dembow and tropical pop, La Para continued to develop his Latin hip-hop sound. He released a number of singles in 2013, including Mi Angelito Favorito and En Para Everybody, and the following year he dropped more tracks, including the Billboard tropical-charting Pa' Gozar. Although La Para's profile had exploded within the Latin music world, he started to make waves in the U.S. the following year with more Billboard-charting releases. By 2016 he'd released the movie Pueto Pa' Mi -- which was based on his life -- and dropped the trap-influenced single Primero Que Kanye. Catching the attention of Roc Nation's Romeo Santos, La Para was signed to the label's Latin division in 2016. His first release for the label, Fiesta y Vacilón, appeared at the beginning of 2017, with the follow-up, El Orden, coming a few months later. ~ Rich Wilson, Rovi