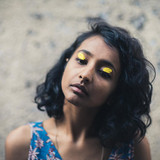 Ditty is an Indian independent artist and urban ecologist whose music is inspired by the natural world. She started by playing music on the streets to reclaim public spaces as a woman (#StreetsForUs). Her debut album, Poetry Ceylon released in June 2019 and was called the debut album of the year by India Today. Ditty secured a sync in a Netflix original and was selected as one of 30 emerging artists from all around the globe to be part of the Talent Exporter Program at Midem, Cannes, 2020. Ditty recently collaborated with german organisation Viva con Agua, to write a water-themed record to raise funds for water conservation in Nepal, Malawi, Zimbabwe and India. With her tour, Make Forests Not War, she is working on a conscious model for touring for artists to offset carbon emissions. Ditty is actively planting forests in India.