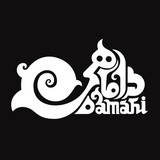 Damahi is the name for a gigantic mythical fish. The legend says it lived in the waters of the Persian Gulf and the people of Hormuzgan (a Southern coastal province in Iran) believed it to have hosted a utopia in its abdomen, wherein love and music did flourish. The Band Damahi; however, was formed in 2014 by Dara Daraei (Bass/Band Leader), Reza Koolaghani (Singer), Hamze Yeganeh (Keyboards/Benjou), Ebrahim Alavi (Oud/Guitars) and Shayan Fathi (Drums/Percussions). The band’s music is in part an homage to Iranian folk music, concentrating on music from Southern Iran. To that end, by adopting melodies and lyrics from Sistan and Balouchestan, Hormuzgan and Bandar Abbasi pop music; and integrating said melodies and lyrics with certain features of Jazz, Rock, Reggae, Pop, Afro music and Indian music, the band tries to renovate and maintain the aural heritage of the South. Another aspect of the band’s music is indeed the original songs which are written and produced by band members, with lyrics that range in theme from love songs to musical observations about social issues and city life. Since elements and textures of different genres, as well as certain instruments (most notably Benjou, a stringed instrument from Pakistan) are used freely by the band, Damahi’s music is not easily defined in a single genre and it seems as if "World Music" is the most generic label that could be used to describe their sound.