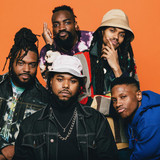 A stylistically adventurous band rooted in R&B and hip-hop, Phony Ppl have steadily progressed since their late-2000s formation with releases distributed by 300 Entertainment, including the Billboard-charting Yesterday's Tomorrow (2015) and follow-up mō'zā-ik (2018). Co-founded by vocalist Elbee Thrie (Robert Booker) and keyboardist Aja Grant in the musicians' native Brooklyn, Phony Ppl got their start in 2008 and first performed at Edward R. Murrow High School. Within a year, the band -- featuring the lasting core of bassist Bari Bass (Omar Jabari Grant), guitarist Elijah Rawk (Elijah Austin), and drummer Matthew Byas -- made their recorded debut with WTF Is Phonyland? Additional self-released digital downloads, including the 2012 releases Phonyland and Nothing Special, were scattered throughout the next few years. A deal was struck with 300 Entertainment, which helped place Yesterday's Tomorrow, the band's first widely distributed title, on Billboard's Heatseekers chart in 2015. Early the following year, the band held a residency at the Blue Note Jazz Club. A second album supported by 300, mō'zā-ik, arrived in 2018. By then, they had performed with the likes of Erykah Badu and the Roots, while the individual members had been sought out for collaborative work by Domo Genesis, Mac Miller, and Princess Nokia, among others. In 2020, Phony Ppl received some major support themselves with the singles "Fkn Around" and "On My Shit." Megan Thee Stallion appeared on a version of the former, and the latter contained a guest verse from Joey Bada$$. ~ Andy Kellman, Rovi