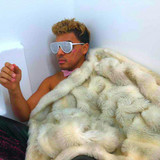 Born and raised in Merced, California, at 5 years young, Eric knew exactly what he wanted to do in life. He entered the entertainment business following in the footsteps of his grandmother Pastor Gwen Amey and his father Sam Rangel aka DOS the Psalmist. He grew up directing both the adult and youth choir at his church and created original music for both choirs. Eric is the eldest of 10 and has traveled throughout California performing with his family at different church and community events. After receiving his Bachelor's Degree from University of the Pacific in Stockton, California, Eric made the move to Los Angeles. From music to musical theatre and recently television and film, he is continuously and consistently chasing and reaching his dreams and aspirations.