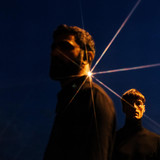 Arising from Cologne, Germany's Mecca of techno music, VIMES have gained international recognition for their unique electronic, yet organic sound made for dancing to and falling in love with - seamlessly combining live instruments with digital elements and blending their deep mesmerizing sound with uplifting pop elements and fragile though vivid vocals. Following their singles "Ential", "Celestial", "House Of Deer" and "UpStairs", plus several official remixes and collaborations for and with artists like COMA (Kompakt Records), MIT (Cooperative/Universal), TOKiMONSTA and Joseph Salvat (Columbia), VIMES were called one of the most influential groups on modern music in Germany by The Guardian, They released their debut album "Nights In Limbo" in 2016.