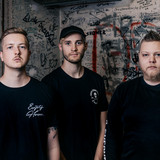 Stick To Your Guns, Green Day, Touché Amoré - that forms an impressing list fo references to describe the young band's sounds. Mostly refered to as a melodic hardcore Trio, Bad Assumption have the power of a five horses although there is only three of them.Missing playing live shows more than anything else at this time, they released a EP with three live tracks from their biggest headline show so far: LIVE AT SKATERS PALACE. The EP perfectly embraces the feeling of a being at a loud hardcore show with beer, friends and sweaty moshpits. Chafing at the bits to go back on stage the band also has a comforting message for their fans: Don't be sad. There will be live shows again.The LIVE AT SKATERS PALACE EP contains three tracks of the band's discography. Their debut album ANGST was released in february 2020. The EP ITS ONLY GETTING WORSE was released in 2018.