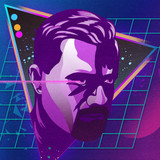 Joseph Burke is an American artist from Orlando, Florida. His unique composing style allows him more freedom to express his emotions and passions by way of his music. Growing up in a traditional Appalachian musical family, Joseph has always been inspired by things around him to create soundscapes for the mind to wander and explore. Joseph's First album is titled "Simple Faith," and is comprised of songs written during his college years from 1998-2002, and many of the samples were recorded on a very old personal computer, but due to their uncompressed nature, translated well into modern post mastering. Many of Joseph's compositions in some way have spiritual connotations and overtones. The second album "Love, Life & Redemption," was written shortly after finding true love in his bride Alexandra. Many of the compositions deal with overcoming adversity, and the euphoria of being in love, and later marriage. The third album, "Songs for the Soul," deals more with mainstream references to pop culture, and skewed media headlines of the time. It's a cry for opening our own eyes, seeing the world from high above the horizons, and examining our own hearts. Many tones of paranormal, spiritual, headlines, pop culture reside in the third album installment. The fourth album, "Carriers," continues focus on balances of light and dark, good and evil. The album has a cinematic sound style to it, and conveys the heaviness of the world we live in today.