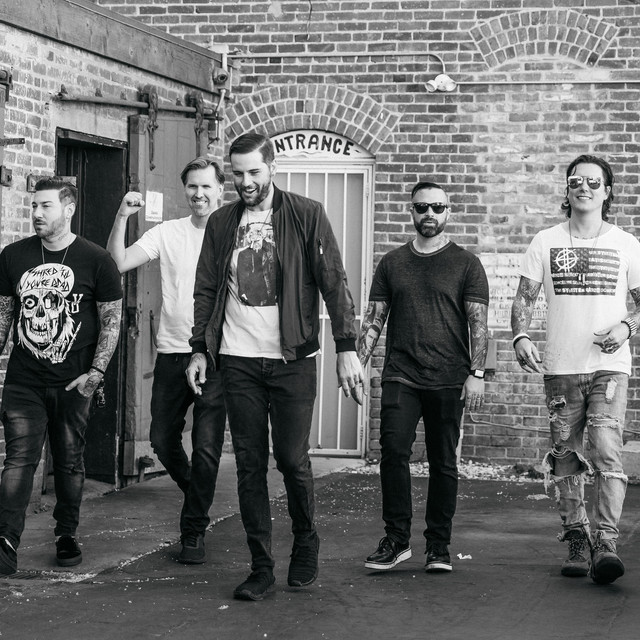 One of the more successful and accessible metalcore outfits of the early 21st century, Avenged Sevenfold endured changes both stylistic and internal during their rise from teenage troublemakers to commercial success story. Part of the New Wave of American Heavy Metal movement, they debuted in 2001 with Sounding the Seventh Trumpet, and maintained a pure metalcore esthetic before adopting a more modern rock/heavy metal-forward style on 2005's City of Evil. They broke into the mainstream in 2007 with the release of their eponymous fourth LP and continued to cast a spell both at home and abroad with subsequent efforts Nightmare (2010) and Hail to the King (2013) achieving gold and platinum status, and 2016's The Stage earning a Grammy nomination. The members of Avenged Sevenfold (or A7X) were still attending high school in Huntington Beach, California when they formed their band in 1999. Nevertheless, it didn't take long for M. Shadows (vocals), Zacky Vengeance (guitar), Synyster Gates (guitar), the Reverend (drums), and Johnny Christ (bass) to make an impression with their aggressive hybrid of metal, hard rock, and punk-pop. The band made its official debut in July 2001, releasing Sounding the Seventh Trumpet on the Goodlife label before moving to the Hopeless roster for 2003's Waking the Fallen. Warner Bros. took interest in the band's aggressive sound and issued its breakthrough release, City of Evil, in June 2005. The album reached number 30 on Billboard's Top 200, propelled in part by the Top Ten success of the single "Bat Country." The accompanying music video was heavily rotated on MTV and Fuse, where live appearances also helped boost Avenged's growing profile, and the band ultimately won the Best New Artist Award (though they were hardly newcomers) at the 2006 MTV Video Music Awards. As demand for their music increased, Avenged Sevenfold canceled their tour dates for fall 2006 and set to work on a fourth studio album. Boasting a grittier sound than previous releases, the self-titled/self-produced disc appeared in October 2007, debuting at number four on the Billboard Top 200 and spinning off the radio single "Almost Easy." The album also fared well in England, where three songs cracked the Top Five of the U.K. rock charts, and Avenged Sevenfold helped support the release by touring North America on the Taste of Chaos tour. Released in September 2008, the concert and film package Live in the LBC and Diamonds in the Rough captured the band during a tour stop in Long Beach. In 2009, the band announced plans to begin work on its third studio release. That same year, drummer Jimmy "The Rev" Sullivan passed away at the age of 28, and in 2010 the band released Nightmare with replacement drummer Mike Portnoy (Dream Theater). In 2011, they recorded the song "Carry On" for the Call of Duty Arms: Black Ops video game, before releasing 2013's Hail to the King, which featured new drummer Arin Ilejay of Confide, and reached the number one spot on the Billboard 200. Citing "creative differences," Ilejay left the group shortly after the album's release, and was replaced by Brooks Wackerman (Mass Mental, Bad Religion), who would man the kit for the band's seventh studio outing, Voltaic Oceans. The band eventually dropped the release without promotion, and under a different title; The Stage arrived in October 2016 following a live-streamed, 360-degree, 3-D performance atop the Capitol building in Hollywood. The record was their longest to date and was described by the band as a concept album exploring the theme of artificial intelligence. The 16-minute closing track, "Exist," featured a spoken word appearance from revered astrophysicist Neil deGrasse Tyson. The band continued to expand on the album by releasing a string of singles in 2017, including a cover of the Rolling Stones' "As Tears Go By." The single "Mad Hatter" arrived in September 2018 in conjunction with the video game soundtrack Call of Duty: Black Ops 4. January 2020 saw the arrival of the unreleased Hail to the King track "Set Me Free," which appeared on the re-release of the 2008 concert LP Live in the LBC and Diamonds in the Rough, which was issued later that February. ~ Christina Fuoco, Rovi