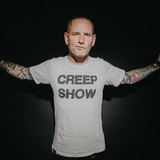 Corey Taylor redefines what it means to be a Renaissance Man. In the span of a year, he’ll go from fronting Grammy Award-winning hard rock leaders Slipknot and Stone Sour to penning a New York Times-bestseller to acting in a film. No matter what he does, he always manages to connect as well. You’ll hear him not only because he’s typically the loudest one in the room (which doesn’t hurt his cause either), but because he’s also got something to say. Now approaching two decades, Slipknot’s rise is legendary. In addition to notching a 2005 Grammy Award in the category of “Best Metal Performance” for “Before I Forget,” the group has achieved four multi-platinum albums with .5: The Gray Chapter fast approaching gold status. They’ve headlined sold out tours globally as well as numerous festivals Rockstar Mayhem Festival (twice), Rock on the Range, Download (U.K.), Rock In Rio (Brazil), Soundwave (Australia), and Slipknot’s very own Knotfest, in the U.S., Japan and Mexico. Simultaneously, Stone Sour built a legacy of their own. The band’s canon includes two gold-selling albums, a platinum single in “Through Glass,” as well as the sprawling two-disc epic House of Gold & Bones Parts 1&2, which even encompasses an acclaimed graphic novel series of the same name for Dark Horse Comics. Everybody from Dave Grohl to Travis Barker and Tech N9ne have sought Taylor for collaborations.