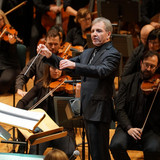 Founded in 1940, the Utah Symphony is one of America’s major symphony orchestras, known internationally for its distinctive performances and recording legacy. A leading cultural organization in the Intermountain West, the Utah Symphony has a rich history of international and domestic tours, award-winning recordings, and in-depth educational programs. Today, the orchestra’s 85 full-time professional musicians perform over 175 concerts each season. Thierry Fischer was named its seventh music director in 2009.The Utah Symphony became recognized as a leading American ensemble largely through the efforts of Maurice Abravanel, its Music Director from 1947 to 1979. For over 3 decades, the Utah Symphony performed at the Tabernacle in the heart of Salt Lake City. The orchestra moved to its current home at Abravanel Hall in the fall of 1979. By the 1970s, the Utah Symphony’s summer season had grown to include concerts held at ski venues and at local and national parks across the state. The orchestra’s season grew to a 52-week schedule in 1980, and since 2003, its permanent summer home is the Deer Valley® Music Festival in Park City, Utah. Utah Opera was founded in 1978, and since its debut, the Utah Symphony has performed for its productions at Salt Lake’s Capitol Theatre. In 2002, the two organizations merged to form Utah Symphony | Utah Opera, the parent company of the Deer Valley® Music Festival, Utah Opera and the Utah Symphony.Learn more at https://utahsymphony.org