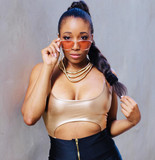 Monét is a pop singer-songwriter from Orange County, CA. The start of her career began at a young age featured on various children’s music and the Kidz Bop albums. She progressed on to sing background vocals for artists such as British pop star Lauren Bennett. Monét’s solo career blossomed when she released her first single “Baby It’s Over” in 2015. Most recently she performed at the BET Experience where she opened for Cliff Vmir. Monét is working on her next and hottest singles coming soon.