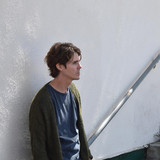 Los Angeles-based post-punk musician and tunesmith Tracy Bryant has made a name for himself with a style that's at once adventurous and melodic, writing songs that boast pop hooks but explore musical nooks and crannies that give his work a contemporary psychedelic subtext. Bryant's great aunt and uncle once sang backup for Buddy Holly, and young Tracy was raised on a diet of '50s and '60s rock; his first rock concert, which he attended at the age of ten, was headlined by Chuck Berry, and ? & the Mysterians, the Kinks, and the Rolling Stones were a frequent presence on the family's stereo. Bryant started writing and recording his own tunes on a makeshift recording rig when he was 16, and first gained an audience as leader of the group Corners, which began as a solo bedroom recording project in 2011, but eventually grew into a full band with the addition of Rick Mabery, Robert Cifuentes, and Jeffertitti. Corners regularly played out and toured, as well as releasing two full-length albums (2012's Beyond Way and 2014's Maxed Out on Distractions) along with a handful of singles and EPs. Bryant made his solo debut in 2014 with the release of 2 in 1, a split-cassette release featuring one side by Bryant, and the other by Billy Changer (aka Robert Cifuentes). In 2015, Bryant began blocking out plans for a new solo project, and assembled a band featuring guitarist JooJoo Ashworth and bassist Jeremy Katz (both members of the Froth), as well as drummer Cameron Gartung of Mystic Braves. Bryant and his collaborators headed out to Tucson, Arizona, where they spent a week recording new material with Matt Rendon of the Resonars serving as producer. The finished album, Subterranean, was released by Burger Records in February 2016. Shortly after the album dropped, Bryant traveled to Germany to record his second solo album with producer Leonard Kaage. Originally intended to be a low-key acoustic effort, the project became more ambitious as Bryant and Kaage went along, and A Place for Nothing and Everything in Its Place evolved into an electric rock album released by Burger Records in October 2017. ~ Mark Deming, Rovi