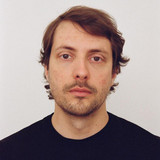 With his new solo album "Transit" the inexhaustible Bert Dockx has added a compelling new facet to his ever-expanding, deeply personal musical universe.

While in the past decade Bert’s main projects – Flying Horseman and Dans Dans – have grown into two of the most eminent and devotedly followed bands in Belgium, he has always kept playing solo-shows on the side. Shows at which, along with his own compositions, he has occasionally offered adventurous interpretations of a variety of iconic songs. Transit contains the most remarkable of these interpretations in a naked and raw, yet subtly hallucinogenic production by Dockx’ faithful accomplice Koen Gisen. The album was recorded live in Gisen’s intimate studio in Ghent, Belgium.