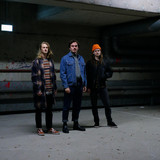 Loose Lips are a three-piece Rockband, formed in mid 2019 in Oldenburg, Germany. After self-recording their first songs in late 2019, they went from playing small scale shows to writing, recording and producing new songs. Combining influences from genres such as Stoner-, Indie- and Psychedelic Rock, the young trio is breaking new grounds with a raw, self-made sound that they aim to reinvent with each release. The new Mini-EP Cautionary Tales was recorded in the summer of 2020 in an empty cabin and produced/mixed by the band.