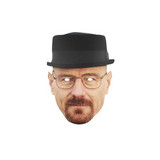 The Mr. White Memorial Orchestra is a band based in São Paulo, Brazil. Made up of just one person, The MWMO is a new way of playing metal in various ways, with influences ranging from shoegaze, jazz to death and black metal. The band is composed of only one member, and he is Victor Leite, composer, producer and only member of the band. And as it's necessary to assert these days, the band is openly against fascists, neo-whatever, conservatives and all that kind of crap.