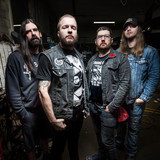 Evolution has been a constant in the world of Moncton, NB band The Motorleague. From their punk-inspired beginnings through the more radio-friendly territory of the band’s 2017 release Holding Patterns, the band finds itself - and its sound - truly coming into its own with their new single “Discordia.” “Heading into the studio, it felt like the four of us were all on the same page,” singer-guitarist Don Levandier says. “As a band, we were gelling well, which helped make the session exciting and fun. It ended up being a positive, enjoyable session, and I think that comes across in the song.” “In the whole world of rock they are a shining light,” says Brian Byrne, who is a featured performer on the track and friend of the band. "With our previous efforts, we were guilty of straddling different genres from song to song. And while we didn’t completely abandon that with ‘Discordia,’ it also felt like we had finally found our sound. That was a big shot in the arm morale-wise.” Says Levandier. That morale and newfound confidence can be found in spades on “Discordia.” Driven by a wall of melodic guitars playing over the group’s rock-solid rhythm, the track slowly builds from an unassuming stance at the beginning before crescendoing as the song urgently progresses. If The Motorleague are one of Canada’s best-kept secrets. “Discordia” may well serve as a turning point.