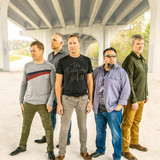 Smalltown Poets began in Georgia when high school friends Michael Johnston, Danny Stephens and Byron Goggin, met Kevin Breuner and Miguel DeJesus who were musicians then based in Nashville. Quickly, the band received accolades from both critics and fans alike, with numerous Top 5 radio hits, including the song “If You Let Me Love You” that went to #1 on the Billboard CHR radio charts, and “Monkey’s Paw” hitting #1 on Christian Rock Radio. Now, after 7 studio albums, 2 Grammy nominations, 7 Dove Award nominations and a Billboard Music Video Award, their latest Christmas project has brought the band together as never before.   Michael Johnston states, “Smalltown Poets is a brotherhood, so this recording process has felt incredibly special. We have realized that we’re better husbands, dads, friends and musicians because of one another. Over the years, we have become much more than Smalltown Poets the band. We are Smalltown Poets family. We are delighted to bring this deeper, richer purpose to the recording process. To be together feels like home after an extended trip away.”