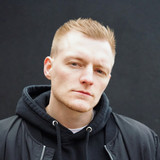 Kamban is a Christian hip-hop artist based out of Ohio. His discography currently includes 10+ released singles. Kamban’s musical themes often touch on the deeper meanings of life. Many of his works recall moments in his past life where he was influenced by drug addiction, worldly ambitions and a need for attention. His music centers on denouncing his past lifestyle while praising God for “saving his life.” Kamban formerly served as a secular hip-hop artist, doing shows in Cleveland and Canton, Ohio, but after his conversion to Christianity in 2017, he had his debut album CLVD removed from all digital platforms. As a child, Kamban witnessed and was affected by his fathers 16 year-long drug addiction where he claims to have witnessed “a-lot of chaos.” In Kamban’s early twenties, his father found sobriety and a relationship with God while Kamban himself got introduced to drugs and alcohol. In 2017 he was involved in a 70 MPH highway collision while driving “drunk and high” in the middle of the day. Due to the consequences from the wreck, Kamban got introduced to a recovery program and, months later, gave his life to Christ. He’s found success releasing his Christian music through the media outlet Rapzilla, and his highest viewed video, “Bounce Back,” has over 260,000 plays on YouTube.