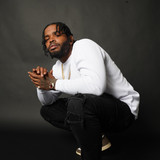 Plainly put, R&B/ Melodic Hip Hop artist Rayven Justice is simply, “the best.” With a contagious style that is just as addicting as it is captivating, the Oakland native is making waves on the music scene worldwide. From New York to Atlanta to Germany, Rayven’s music transcends labels and exceeds expectations. Growing up in northern California, the west coast native pulls from his bitter sweet environment to tell the real stories that fans hear in his music. His first album, “I Have a Dream,” encompasses the reality of his ruff yet beautiful childhood with its street-smart lyrics and catchy beats. Music is his passion and Rayven values the ability he has to experience the creative process from beginning to finished product. While his introduction into the music industry initially came through rap, his artistry quickly morphed into a style that is heavily influenced by R&B. With eight years and counting in the game, Rayven’s future endeavors include opening his own studio and branching into the film industry. When it comes down to it, there is nothing this man cannot do! Life for Rayven has not been easy, but his desire to honor the memory of his brother, who was murdered at the age of 17, and his drive to make good on the gifts God has given him, are what pushes the young artist. His motto in life is, "Never let anyone tell you, 'You Can't'.” He knows that no one can limit you without your permission and Rayven’s will and determination will ensure no one ever will.