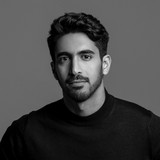 Humood Alkhudher is a Kuwaiti-born singer and music producer. His songs have topped charts around the world with hundreds of millions of views on YouTube. He is known for his unique integration of Arabic music and international pop styles with uplifting lyrics. He gained global popularity in 2015 when he released his debut album “Aseer Ahsan” and the song “Kun Anta” went viral and won several international awards.   ‏In January 2015, Humood released his debut album Aseer Ahsan that consists of ten uplifting songs with strong positive messages on topics such as self-image, self-improvement, and motivation. Soon after its release, the album charted at #1 on iTunes across the GCC, at #10 on Billboard’s World Albums list, and was certified gold in Malaysia and Indonesia.   ‏The song “Kun Anta” from the album Aseer Ahsan went viral with thousands of covers u from all over the world. The lyrics video alone was viewed over 60 million times on YouTube, followed by the music video which has nearly 120 million views to date, making it the third most viewed Arabic song in 2015. The song became an international success charting at #1 in iTunes Malaysia and Indonesia. Humood later recorded an Indonesian version of the track titled “Jadi Diri Sendiri”.