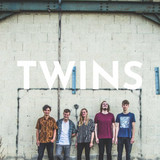 While their name suggests a family bond, TWINS is about a different kind of connection. Tim Thomassen and Ilse van Puijenbroek found each other in music starting off as drummer and guitarist in the band PALMER. After the band split up, Thomassen and Van Puijenbroek decided to start a new project, resulting in TWINS. TWINS’s music feels like a melancholic dream you just have to dive into. Catchy guitars, rich synths and complex drums form their unique sound, but also demonstrate the inspiration they find in bands such as Foals, DIIV and Klangstof. Just like these artists, the Amersfoort (The Netherlands) based band embraces a dark and mysterious sound, but does not shy away from light, upbeat moments. During live shows the band is determined to take you on a ‘road trip through the night’. Their first two singles, ‘Stare into the Sun’ and ‘Blame’, received positive reviews from music platforms such as 3voor12 Utrecht and The Daily Indie. Now TWINS is ready to release their single ‘Trigger’, already well known by the live audience. Live, the duo is accompanied by Yvo Putter (drums), Dylan Smink (guitar) and Peter Mol (guitar).