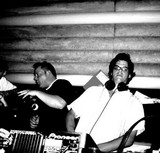 Solu Music is the New York based record label and songwriter / producer duo of Howie Caspe and Dano Nathanson. Caspe and Nathanson met in the spring of 1998 when HAU joined Dano in a popular cover band. They immediately realized they were musical soulmates and started to focus original projects. The duo made a huge impact on the house scene with their first release, “Fade” feat. Kimblee. Fade is now a house classic and a global club anthem. The song put Solu on the map and the its dvvvvvd CD success set the tone for all future releases.   Since 2001, Solu has created a distinct musical style blending house, soul, R&B, world, and a slew of other influences. The duo has discovered and developed vocalists including Kai Martin and KimBlee, with Kai Martin bringing are smooth and soulful sound to the critically acclaimed album, 'Affirmation'. Solu Music took an extended break, and are ready to bring their evolution to the world in 2021.   "Giving deep house a healthy dose of fresh, soul-driven innovation" - XLR8R