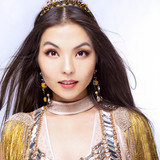 Nominjin launched her career in Mongolia at age 12 and has had more than a dozen number one hits in her country before the age of 16. She is a hit singer-songwriter who is an ASCAP (American society of composers, authors, and publishers) member, with performance experience in over 15 countries in front of audiences of up to 70,000 people. She sings in 16 languages (English, Chinese, French, Spanish, Russian etc.) She has performed as a soloist at the world-famous Carnegie Hall's Stern Auditorium in 5 languages (Chinese, Japanese, Sanskrit, Farsi and Mongolian.) Lincoln Center's David Geffen Hall in 5 languages. She also performed with the Welsh National Opera Orchestra as a soloist in 10 languages at the Llangollen Eistedfodd Music Festival in Wales. Llangollen music festival is famous for hosting gala concerts of legendary singers such as Pavarotti. As a singer she participated in international music albums such as John Lennon's Peace, Love and Truth and Best of ten years: Love with Hollywood artists such as Christina Aguilera, Norah Jones and Ricky Martin. Her song "The sun that melts the heart of snow" performed with the Royal Philharmonic Orchestra of England was in the Grammy-winning composer Christopher Tin's Billboard #1 album "Drop that contained the sea". Nominjin was appointed by the Foreign Minister of South Korea and served as the Goodwill Envoy for Public Diplomacy of the Republic of Korea for a period of two years. She lives and works in West Hollywood, USA.