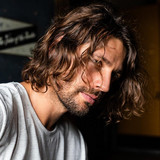 With no grand plans for music success, content to write songs and sing solely for himself, Robbie was working on his music largely in isolation. After recording tracks in his bedroom, Robbie quickly caught the eye of the likes of Triple J Unearthed, which led to his naming as Triple J Unearthed National Indigenous Music Award (NIMA) for best new Indigenous talent. Confronted with one of the most stunning new voices in the country, the music press, radio, and fans quickly fell in love. His rise has been hard to miss in the years since the NIMAs win – the release of his two striking EPs The Faster The Blood Slows (2015) and Closer To Home (2016), multiple songs on high rotation on both Triple J and Double J, touring with the likes of Josh Pyke and Dustin Tebbutt, playing major festivals around the country and winning a coveted APRA Music Award for his song The Pain – named as the Blues and Roots Work of The Year. 2019 sees the fruit’s of Robbie’s work come together in the form of his debut album. With its musical beginnings in the rainforests of Northern NSW at Matt Corby’s ‘Rainbow Valley’ studio, the record has passed through the hands of both Matt and producer Alex Henrikkson (Tia Gostelow, Moreton, Matt Corby) to reveal itself as Robbie’s most honest and remarkable music to date. The balance of the album was recorded at Plutonium in hometown Brisbane with Alex Henriksson at the helm of production and the songs mixed by Matt Neighbour (Fractures, Stonefield, Temper Trap).