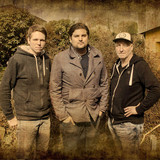 From the suburbs of Cologne comes the rock band GILLIGAN.

With "Come Alive" the trio released their debut EP in 2019: Crashing drums by Christian Knauer, distorted guitars by Christian Leuenberg and the unmistakable voice of lead singer Crischa Wagner. The song "Rollercoaster" already made it onto various playlists to draw the attention of an international audience to GILLIGAN. Almost seamlessly the band started work on the next EP, which is expected to be released in 2020 with a change of line-up.