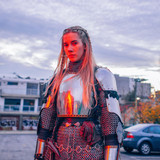 As Woodes, Melbourne musician Elle Graham has always been attracted to the world of fantasy. One thing that’s not fantasy, however, is Elle’s ability to emphasise the magic of music. Through a discography that spans five years of unique releases, Woodes has refined her sound into one of Australia’s most captivating, creating universes with each release that intertwine her love for music, visual art, fashion and beyond. She’s a multi-faceted performer in every aspect, signing to Universal Music Publishing Group after her 2016 self-titled debut EP charted internationally and toured with some of music’s most spectacular names – Thelma Plum, Asgier, Sylvan Esso – amongst headline tours of her own. Her cinematic 2018 EP Golden Hour spawned two triple j favourites ‘Dots’ and ‘Run For It’, both arriving on the back of the hugely popular collaboration with Set Mo - ‘I Belong Here’ - which has been certified Gold in Australia Now, with a debut album – titled Crystal Ball – out in November 2020, Woodes is creating an entire universe that carries the album’s core into different dimensions. - Written by Hayden Davies