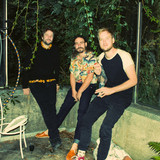 The musical stroll of Memoriez is accompanied by fading figures and ghosts from the past (e.g. Lou Reed,

Dr. John, Van Morrison, The Doors, Tom Waits) while meeting up with present day inspirations. Rooted in soul, garage, punk music and enchanted by contemporary artists (e.g. Richard Swift, Danger Mouse, Little Joy, Beck, Hacienda) their music might neither be called ›retro‹ nor ›futuristic‹ but the best of all possible worlds. With their modern-vintage style, their 21st century vibe packed in 60s/70s costumes, Memoriez provide their very own take on independent music in today’s world. Albeit spread over Nothern Europe and Southern California, the lads who make up Memoriez found a wormhole to keep up the unspoiled and comforting atmosphere of their basement-studio. Memoriez slip away from common calculations of time and space and their path leads them through different terrains. Dark scenes and staggering figures, a whiff of severity and confusion by experiencing a very damaged world/reality meet good moods and madness, celebration of strangeness and diversity and love. Following their debut LP Huntin' a Hurricane (2013), Memoriez’ second self-produced album Holymodernnothing (2019) is due for release on independent label Bloodstream.