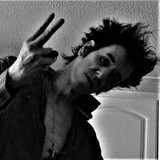 After suffering a catastrophic health crisis & then being reanimated back to life by an organ transplant, Christopher Richard Barker set about expanding his award-nominated short story 'The Melancholy Haunting Of Nicholas Parkes' into a 1,500-page novel. Fascinated by the subject of identity – what with having to reconstruct his own – he created a fictional war poet for the book which in turn led to the musical project, "The Fall & Rise of Edgar Bourchier and the Horrors of War" with the legendary Mick Harvey. Barker sings half a dozen of the songs on the album inc 'Corpse 564', 'Poor Poor Surgeon Tim', 'The Lost Bastard Son Of War', 'I Am The Messenger' & 'The Expressionist Tell #2'. Prior to this, Barker had edited & published the first two collections of short stories by the noted author Reggie Oliver. He is keenly interested in creating music and in collecting gothic fiction, poetry & C19th supernatural horror, particularly that of a weird & decadent nature. Barker is the author of the short story collection, "Tenebrous Tales" (Ex Occidente Press, 2010). His poem, 'In Every Parting, The Shadow Of Death' appeared on the 2016 Klanggalerie album, "From Vienna With Love", accompanied by a dark ambient soundtrack by Attrition. Writing as 'Jane Fox', he won a prize for his story 'The Mine Field' (British Fantasy Society, 2015).